What is Viscerosomatic pain? 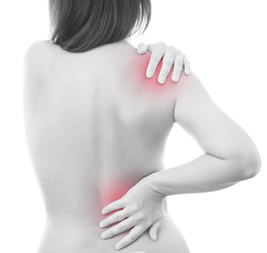 What is Viscerosomatic pain?

Ever wondered why your left arm can hurt during a heart attack? It’s a Viscerosomatic reflex.

The concept of ‘viscerosomatic reflex’ is that of an interrelationship between any organ (viscera) and a closely related part of the body’s structure (soma).

Anecdotally, Osteopaths have been addressing this source of pain for over a hundred years, but only recently has there been reproducible scientific evidence of its existence.

Common signs and symptoms of pain from a visceral source include:

A viscerosomatic reflex is formed when a pain signal from an organ enters the dorsal horn of the spinal cord where interconnecting neurons relating to peripheral motor (muscles, blood vessels, skin) structures also reside.

A theoretical opportunity is present of the pain signal being transmitted between these closely related visceral and somatic cells within the spinal cord, resulting in a variety of pain symptoms on a much wider scale rather than just within the originating organ itself.

Figure 1 below is a schematic representation of the reflex itself.

Specific sources aren’t confined to traditionally sounding ‘organs’ either. Structures such as blood vessels, gastrointestinal wall (peritoneum), tissue anoxia/hypoxia and even certain by-product metabolites have been shown to contribute to this neural stimulation1.

There are innumerable possible sources when we consider the everyday workings of our body’s intricate systems. 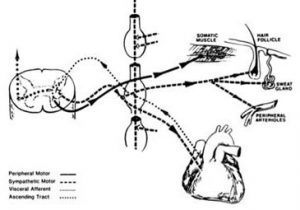 Experimental research has shown a direct effect on paravertebral (spinal) musculature with renal, ureter, small intestine or colon and fallopian tube electrical stimulation in rabbits with muscular responses varying depending on which organ was stimulated. Further, Schoen demonstrated a localized muscle response in the upper thoracic spine of cats that was associated with acute periods of coronary ischemia, a reproducible phenomenon seen in humans. In a slightly different experiment, Hixdemonstrated a significant enlargement of sensitivity of skin specific to that of corresponding organ stimulation, suggesting that throughout these experiments the strongest evidence lies in both abnormal muscular contraction as well as a change in skin sensitivity as common symptoms.

In a 5-year, double-blind study of 5,000 hospitalized patients were examined for musculoskeletal dysfunction (or signs thereof – muscle spasm, tenderness, decreased range of motion) with results being compared to their original diagnosis. Kelso concluded that the majority of visceral diseases appeared to affect more than one region, that pain was mostly found on the side of the affected organ and that the number of musculoskeletal structures affected appeared to be related to the duration of the visceral dysfunction or disease.

Further, he found that in those patients with sinusitis, tonsillitis, disease of the esophagus or liver had findings of dysfunction within the cervical spine (neck), and those with bronchitis, coronary artery disease or chronic heart disease, stomach ulcers and gall-bladder issues showed significant dysfunction in the lower portion of the thoracic spine (upper to mid back).

As this link has been established, it is hypothesized that some musculoskeletal pain can in fact be an early warning sign of underlying visceral disease, thought this has yet to be tested.

Although most cases of pain can be easily reproduced upon examination, when there is evidence of a possibly underlying viscerosomatic reflex further investigation can be useful.

Techniques can be used to mobilize and free restricted and dysfunctional organs and relieve pain that may have been unresponsive to musculoskeletal manipulation in the past.

If you have experienced chronic, irregular and non-specific pain, a viscerosomatic treatment approach may be effective in alleviating those symptoms.

Dr Peter Pedersen is a certified practicing Osteopath & Chiropractor, with 43 years in practice. He is also a health educator, researcher as well as an accomplished author of articles and published research.